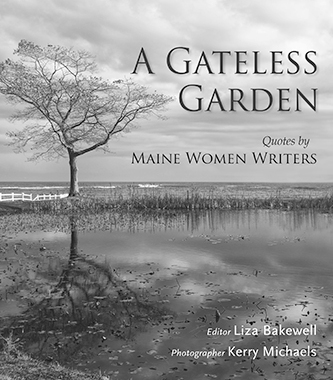 In this collection of quotes by Maine women writers, editor Liza Bakewell has gathered together women’s voices from 1800 to present, beginning with Madame Sally Wood, Maine’s first novelist, and traveling through the last two centuries up to the present day. The matching of quotes with photographs by Kerry Michaels accentuates just how much Maine women writers have energized the […]

The Story I Want to Tell by Telling Room wrtiers

by Ramona du Houx The Story I Want to Tell is a celebration of The Telling Room’s first ten years and its enduring belief in the power of storytelling. To mark this milestone, the book pairs twenty of the best pieces written by The Telling Room’s young writers with brand-new, answering pieces from award-winning writers. “I had a blast working […]

Portland Press Herald reporter Bob Keyes was acknowledgedfor his commitment to covering the state’s literary arts with a distinguished achievement award from the Maine Writers and Publishers Alliance. Maine Literary Awards were presented in 17 categories, including fiction, crime fiction, nonfiction, memoir and children’s books. The alliance will announce the winners in a mailing to independent bookstores across Maine that also will include stickers that booksellers can affix to winning books. The winners included Roxana Robinson for “Sparta” in fiction; Al Lamanda for “Sunrise” in crime fiction; Lincoln Paine for “The Sea and Civilization” in nonfiction; Peter Korn for “Why We Make Things and Why it Matter” in memoir; Lynn Plourde for “You’re Wearing THAT to School?!” in children’s; Maria […]

Project Omaha Beach: The Life and Military Service of a Penobscot Indian Elder

Book by Charles Norman Shay In 2007 Charles Norman Shay went to Washington, DC, to receive the Legion of Honor medal from French President Nicolas Sarkozy. The medal has joined the others bestowed on him, including a Silver Star and four bronze battle stars from World War II and the Korean War, in his home on the Penobscot Indian Island Reservation in Old Town, Maine. As a young Army medic he had been in the famed 1st Infantry Division that landed in the first wave on Omaha Beach, Normandy. He does not recall how many men he pulled from the water while bullets were streaming past him. “We’ve all had our individual experiences, and none are more dramatic than the next,” said […]

The Maine Writers & Publishers Alliance announced their finalists for the 2014 Maine Literary Awards. This year’s awards brought in a record-breaking number of submissions: Nearly one hundred and twenty-five books were entered across the genres. More than seventy manuscripts were submitted into the award’s Short Works Competition in the categories of fiction, nonfiction, and poetry. Nearly seventy Maine students submitted work in the same categories in the award’s Youth Competition. The MWPA is honored to have three independent bookstores sponsoring this year’s literary awards. Sherman’s Books—booksellers since 1886 with locations in Bar Harbor, Boothbay Harbor, Camden, Freeport, and Portland—is this year’s platinum sponsor. Portland’s fiercely independent Longfellow Books is our gold sponsor and Damariscotta’s Maine Coast Book Shop is […]

Shay, a Pennobscot elder, writes about his experiences in WWII and Korea as a medic

My family and ancestors have lived, hunted and fished along Maine’s seacoast and in the valley of the Penobscot River since the Ice Age. Migrating between the coast and inland forests, they paddled bark canoes on rivers, across lakes and along salt-water bays, pausing to set up camp for a few weeks or months at a time. One of my forefathers was Chief Madockawando who camped seasonally at the headwaters of the Bagaduce (now called Walker Pond), just a few miles from Eggemoggin Reach. One of his daughters, my foremother Pidianiske, married young French military officer Jean-Vincent d’Abbadie, who was stationed at Fort Pentagoet toward the end of the 17th century. This French colonial stronghold stood at a strategic location […]

Polar Bear & Company has been printing quality books and art since 1997 in Solon, Central Maine. Vision: We strive to enhance the quality of life through literature and art. Mission: To give well-intentioned, creative people avenues for their words, wisdom, wit and other talents so they can reach individuals to make stronger communities. Democracy flourishes when creativity is allowed freedom of expression. We publish books and produce art to open one’s imagination and to inspire.

Continental Liar From the State of Maine: James G. Blaine by Neil Rolde

In 1884 Republican James G. Blaine came within 1,047 votes of becoming the President of the United States. This was the margin by which he lost New York State—and thus the election—to Grover Cleveland in what has been called “the dirtiest campaign in American history.” Yet his career—arguably the most sensational of any American politician of the so-called Gilded Age—did […]

Maine In the World: Stories of Some of Those from Here Who Went Away

by Neil Rolde From its earliest beginnings, the land that became Maine produced adventurous inhabitants who went outside its boundaries to do interesting things that sometimes made them famous or even infamous. The inspiration for this book came from the tiny Pacific island of Kosrae in Micronesia, where Brewer native and Bangor Theological Seminary graduate the Reverend Galen Snow converted all of the natives to Christianity, and Portlander Harry Skillins left a record as a vicious pirate and who sired a line of descendants by native women.

Maine books on politics and people

Real Political Tales: Short Stories by a Veteran Politician, by Neil Rolde “If you’ve ever served in a state legislature, lobbied one, or just read about their activities in the newspaper and wondered what goes on behind the scenes, you’ll love this book! From page one I couldn’t put it down and I loved every word of Neil’s stories crafted […]