The exhibition at the University of Southern Maine Art Gallery in Gorham explores the infamous removal in 1912 of the inhabitants off the coast of Phippsburg. BY DANIEL KANY of the Portland Press Herald Atrocity is others. But not always. Sometimes art takes on subjects that are bigger than the scope of an individual artist. We see this, for example, in […]

BY DANIEL KANY of the Portland Press Herald 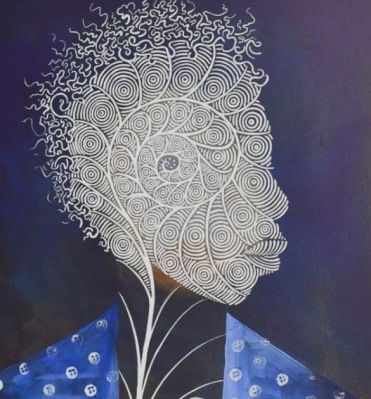 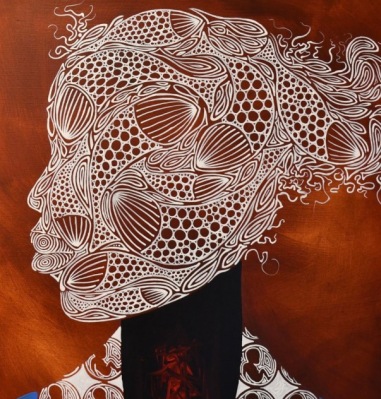 Atrocity is others. But not always.

Sometimes art takes on subjects that are bigger than the scope of an individual artist. We see this, for example, in art about the Holocaust. But we know the tragic history, so any given work has a broad enough context for us to balance the individual subjectivity of the artist with the societal and cultural monstrosity they seek to represent.

The subject of Daniel Minter’s “Malaga Island,” now on view at USM’s Gorham campus Art Gallery is an atrocity committed against a group of Mainers in 1912 – the 45 inhabitants of Malaga Island, just off the coast of the Phippsburg peninsula at the mouth of New Meadows River in Casco Bay. Then-Governor Frederick W. Plaisted ordered the removal of the inhabitants from the picturesque island. He separated the children from their parents. (Sound familiar?) Women were sterilized. He sent many of these people off to various institutions, including eight to the Maine School for the Feeble-Minded in Pownal, what is now the campus of Pineland. He took down their school and moved it to another island. He razed their homes. He even dug up their buried dead and moved them away.

The reason: White nationalism. (Again, sound familiar?) The people of Malaga Island were mostly of mixed race and their settlement had been founded by a black American.

It was an atrocity. And it was committed in America by a Maine governor, a man democratically elected under the authority of our state’s constitution.

Minter’s work isn’t driven by the rage I feel when I think about this wrongdoing. Minter’s paintings, assemblages, informational presentations and installation are geared towards humanizing – or should I say re-humanizing – the people of Malaga Island. While his wistfully handsome portraits of people on the island hang on the walls of the gallery, a house-shaped installation sits in the center of the room. On it and within it are traces and tokens of life on the island: pictures of the people, buttons, bones and shards of crockery. Minter also includes shells and bones of animals; the island homes, after all, were wisely built on piles of shells that not only drain well and remain stable, but act as middens that wound up preserving many archeological traces of these people and their lives

Nine of Minter’s 11 paintings are portraits, tall and slender canvases leaning on a ghostly blue palette; blue is the color of night, the saturated highlight of blackness. They are dreamy images of people past and present: Minter seems to have been particularly inspired by the experience of contemporary visitors taking their first steps onto the island, walking in the steps of those who were removed by Governor Plaisted. One remarkable leitmotif is the image of buttons. Among the industry of the island was laundry for the folks on the mainland, and so plenty of buttons were left behind, and Minter even presents a pile of these on a pedestal. Remarkably, he doesn’t put them in a bag or under a vitrine. Their physical presence almost forces a shared physical empathy with the people of Malaga.

This is Minter’s great artistic achievement: empathy. His painting is beautiful and accomplished, particularly his signature white-line designs that add a sense of almost delirious beauty to his canvases, something like doily-shrouded brilliance. But within Minter’s storytelling-informed approach, he relies on subjectivity, personal connection and spirituality. Mere storytelling might be simply about “them,” but Minter makes this about “us.” The mixed-race aspect quietly becomes the crux: It was the original problem, but it is our solution as well. The reason for Plaisted’s action wasn’t merely to target blacks, it was the mixing of the races. It was a time when eugenics drove racism, and that, unfortunately, has been around more recently than most Americans choose to remember: In my lifetime, it has been illegal (i.e., anti-miscegenation laws) for black people to marry white people in more than one-third of American states. And I’m not that old… …But the story includes a recent official apology by Governor Baldacci and then Mainers like Minter who seek healing in truth and empathy. Another part of the story, of course, goes back further: More white men from Maine (per capita) gave their lives in the war against Slavery – the Civil War – than any other state in the Union. In other words, the solution (however slow) appears to lie with the fact that most people are good people: That, at least, is the basis for faith in the moral progress of democracy. With his caring touch and soft-spoken presentation of the story of Malaga Island, I get the idea that Minter’s approach is somewhere along these lines as well. He is giving us context for a conversation we all need to have.

“Malaga Island” is a show that should not be missed. It is moving and beautiful. It is also oddly empowering: We are better than that, and we know it. And it gives us something to do in the name of good: We all need to be watchful to ensure nothing like this ever happens again (because it does happen). And it is this that brings us all together.