“This haunting autobiography is a major contribution to the newly growing body of Holocaust-survivor-children’s memoirs. Its two-part title says much: “Piecing Scattered Souls” highlights the care in the centripetal organization of the three-generation narrative dealing with the author’s survivor parents, his own generation of Holocaust-survivor children and their wives, and the next generation of his four children.

“The tome’s subtitle, “Maine, Germany, Mexico, China, and Beyond,” highlights the macrocosmic venue in which the events unfold. David O. Solmitz’s evocation of his professor-father, Walter Solmitz, a survivor of the post-Crystal-Night weeks-long incarceration in Germany’s first concentration camp, Dachau, is comprehensive: In his analytical portrayal, Solmitz is sensitive to the all-pervasive survivor guilt that led to his father’s suicide in his fifties.

“The rich collection of firsthand documentary material throughout the memoir makes the narrative real and believable. Particularly compelling is the detailed, comprehensive report by Walter Solmitz that serves as the volume’s first appendix: a rare account of the Jewish prisoners’ daily lives in Dachau at the end of 1938.

“The words I would use to characterize this unique volume are: “honest,” “engaging,” “self-probing,” and “thoughtful.” Not only was Walter Solmitz a philosopher in the best sense of the word, his son, David, is one as well.”

“Guided by the twin shibboleths of his father – a philosopher, holocaust survivor, suicide – Socrates’ ‘Know thyself’ and Pindar’s ‘Become who you are,’ David Solmitz takes us on a searing pilgrimage of pain, healing, and redemption. Shuttling between past and present, across five generations, three continents, he weaves, like Wordsworth’s poet, a rich tapestry of ‘relationship and love.’ An unforgettable memoir.”

“Even as he survived the Holocaust, and despite a tragically foreshortened life, Walter Solmitz never ceased in his intellectual pursuit of truth as a teacher, scholar, and believer in democracy. In this riveting account of his parents’ escape from the horrors of war in Europe and their courageous attempts to make a meaningful life in a new country and culture, their son, David, has given us a moving family history and a record of his own intellectual and spiritual growth, accompanied by a profound meditation on the state of our lives today. As I read this beautiful book, I couldn’t help thinking how proud his father would be of his son, who embodies his ideals in his own teaching, writing, and citizenship – ideals we need to hold to if we are to survive as a self-aware people in a free society.”

— Peter Anastas, former student of Walter Solmitz, Author of No Fortunes and Decline of Fishes 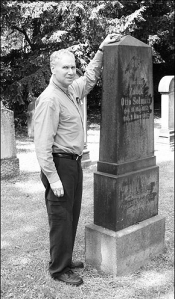 David Solmitz grew up in Brunswick, Maine, home of Bowdoin College, from which he graduated in 1965 and where his father taught philosophy. Following in his father’s footsteps as an idealist, while a high school student he planted flowers on traffic islands on his town’s main street, developed Brunswick’s first antipoverty project in 1964, taught at Germany’s first coed and progressive boarding school, which his father had attended as a boy, and continued for forty-plus years in his dad’s footsteps as a creative teacher and social activist. In 2001 Peter Lang published his book, “Schooling for Humanity: When Big Brother Isn’t Watching.” From his mother, an artist, he learned the joy of watercolor painting, a hobby he continues today. He lives with his wife Jing Ye in Waterville, Maine.

“David O. Solmitz’s Piecing Scattered Souls is the story of Walter Solmitz, philosophy professor and Holocaust survivor who committed suicide in 1962, and of his son’s response to this tragedy. Very readably, the author discusses the forces behind Professor Solmitz’s death and goes on to narrate his own grief, recovery, and development as an educator. In practical terms, David explains his concept of a democratic classroom.

“An Appendix contains Prof. Solmitz’s “Report about Dachau.” In a concentration camp, Solmitz rose above terrible pressures to produce an incisive analysis of the brutality round him. The reader of the Report is reminded of Plato’s Phaedrus, as quoted by Irwin Edman in Philosopher’s Holiday: “And therefore the mind of the philosopher alone has wings; and this is just, for he is always, according to the measure of his abilities, clinging in recollection to those things in which God abides, and in beholding which, he is what he is.”

“David Solmitz pieces shattered souls with four strands of non-fiction literature. From genealogical research he locates ancestors in Texas, USA, Mexico and Germany. During the second World War philosophical and ethical insights and presented. From a most candid autobiographical presentation, he pieces together his own soul. The life of prisoners at Dachau is faithfully recorded in an appendix.”

Order saying you saw this write up on Insights and deduct $5 from your total.