Thirty-four artists represented by Gallery Storks participated in the Affordable Art Fair in New York City in October, 2013. The exhibit was a success for the gallery and will hopefully bring interest in Storks from around the world.

The next Affordable Art Fair will be in London in March and Storks plans to be a part of that event as well.

Gallery Storks owner, Takafumi Suzuki, worked with Ramona du Houx over thirty years ago in Tokyo at Nihon Digako, Japan University. They both have continued to explore photography and exhibit. Three years ago Takafumi opened his own gallery in the Tokyo arts district. Ramona is now represented by Storks and a branch of the gallery is due to open in Maine.

From the Bangor Daily News by Morgan Rogers, the article was also in Maine Insights.

Ramona du Houx has been taking photographs since she was twelve. Inspired by images she saw in National Geographic and the original Life magazine, she decided to make a difference with her life with photography. Currently she takes photos commercially and for a statewide news magazine.

In 1979 she developed a technique, called Lightgraphs, which shows motion and energy in a unique way. It became her way of painting with the camera. Some of these fine art photographs resemble impressionistic art works and have been exhibited in New York, Japan, Scotland, England, Ireland and Maine.

“Some Native American’s say everything is a part of everything else. At times we can sense that reality, like when the sun wraps around objects late in the day and breezes gently move tree leaves, grain and clouds in landscapes,” said du Houx. “I wanted show how everything is interconnected, to capture that stillness that also combines a rush of energy, with my photography. To covey this energy and balance I use a slow shutter speed while constantly moving the camera.”

Ramona has been a professional photographer for thirty years. She traveled the world with her camera, fascinated by people, politics and everyday community life. In 1991 she fell in love with Maine and settled in Solon.

“For this set of four images I focused on the character of each season. The seasons are constant, yet they are never the same. From year to year they are nature’s balanced dance of change. Merging with nature’s dance rhythms is an integral part to our existence,” said du Houx about the current exhibition. “I wanted to capture the elemental balance of the seasons in motion to help us reconnect with nature’s dance of change so I danced with the patterns of nature I saw within each season when I took the images.”

The du Houx images on exhibit are:

A fun four-day event hosting over 50 galleries and a huge array of contemporary art, the fall edition of the New York City Affordable Art Fair will take place from October 3-6, 2013, with the Private Preview Party on October 2, at The Tunnel in Chelsea.

What the Affordable Art Fair is according to their website: “Our concept is simple, yet unique: an inspiring and friendly atmosphere in which you can find thousands of original paintings, prints, sculptures and photographs all under one roof, ranging from $100-$10,000, with more than half priced under $5,000.”

In 1996, Will Ramsay opened Will’s Art Warehouse in southwest London to bridge the public’s increasing interest in contemporary art and London’s highbrow gallery scene. The gallery was able to offer works from about $100 up to $5,000 from a stable of over 150 artists.

The response from the Art Warehouse led to Ramsay to approach galleries selling affordable art to exhibit together. The result became the Affordable Art Fair. The first fair was launched in Battersea Park, near where du Houx lived, in October 1999 as 10,000 visitors took advantage of the ease of buying, breadth of choice, affordable prices and user-friendly approach. 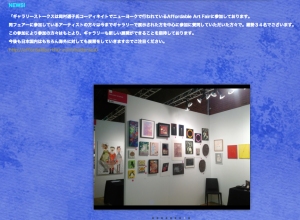 This photo shows Ramona’s Whisper Song on display at the Affordable Art Fair. Please click on the photo to go to Gallery Storks.